LADY GAGA is on a roll. Having just announced her role in Bradley Cooper’s A Star Is Born and revealed a collaboration with Florence Welch, the actress and singer has signed up for the coveted half-time performance at the 2017 Super Bowl, according to reports this morning. 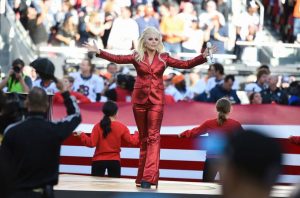 While she hasn’t made any official comment about her latest commitment, Gaga is in the perfect position to fill the headlining slot. At this year’s event, she opened proceedings by singing the American national anthem – something which she said at the time was “one of the highest honours of my career.”

The half-time show regularly attracts 100 million viewers in the US, making it the most-watched musical performance every year. This year, Beyoncé took to the field, delivering a powerful rendition of her hit single Formation and paying tribute to the Black Lives Matter movement.

While the pairs’ performances will inevitably draw comparison, Gaga is not one to shy away from making a statement of her own and will ensure all eyes on the playing field come February 5 in Houston, Texas.